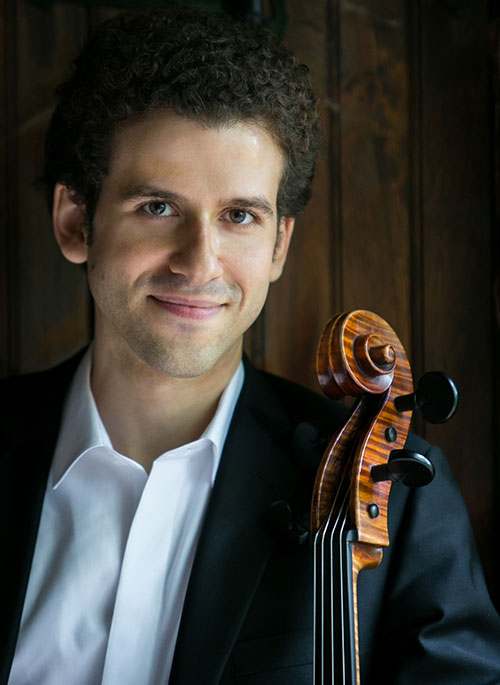 Hailed by the The New Yorker as a “superb young soloist,” Nicholas Canellakis has become one of the most sought-after and innovative cellists of his generation, captivating audiences throughout the United States and abroad. In The New York Times his playing was praised as “impassioned” and “soulful,” with “the audience seduced by Mr. Canellakis’s rich, alluring tone.”

Mr. Canellakis recently made his Carnegie Hall concerto debut, performing with the American Symphony Orchestra in Isaac Stern Auditorium. Other recent and upcoming highlights include concerto appearances with the Albany Symphony, New Haven Symphony, Greenwich Symphony, Erie Philharmonic, and Pan-European Philharmonia in Greece; he will also embark on a U.S. recital tour of American cello/piano works, culminating in a performance at Lincoln Center in New York City.

Mr. Canellakis is an artist of The Chamber Music Society of Lincoln Center, with which he performs regularly in Alice Tully Hall and on tour. He performs numerous recitals each season with his duo collaborator, pianist/composer Michael Brown, and is a regular guest artist at many of the world’s leading music festivals, including Santa Fe, Ravinia, Music@Menlo, La Jolla, Bridgehampton, Hong Kong, Moab, Music in the Vineyards, and Saratoga Springs.

A winner of the prestigious CMS Two international auditions, Mr. Canellakis has also been in residence at Carnegie Hall as a member of Ensemble Connect. He is a graduate of the Curtis Institute of Music and New England Conservatory, where his teachers included Orlando Cole, Peter Wiley, and Paul Katz. Mr. Canellakis is on the faculty of the Brooklyn College Conservatory of Music.

Filmmaking and acting are special interests of Mr. Canellakis.  He has produced, directed, and starred in several short films and music videos, including his popular comedy web series “Conversations with Nick Canellakis.” All of his videos, as well as more information on Nick, can be found on his website at:
www.nicholascanellakis.com.

Page load link
We use cookies on this site to improve our service, perform analytics, personalize content and remember website preferences. By using this site, you consent to these cookies. Chamber Music Sedona may collect and use personal information that you submit in any manner consistent with uses noted in our privacy policy. For more information including how to manage your consent visit our Privacy Policy . OK